An installation with video projection on gauzes.

The video US & THEM opens with the voice of an Asian-American stand-up comedian who self-mockingly makes a distinction between Asian and ‘regular’. Stereotypes are a powerful starting point for understanding the world around you, but at one point, you’ve got to move on to a more nuanced, critical view.

For US & THEM Alice Wong and Aryan Javaherian have remixed their research on Asian stereotypes. Their montage brings together a host of both visual and auditory sources: from historical photographs to pop culture such as The Simpsons. Along the way, the Western mainstream idea of ‘the Asian’ gets deconstructed – revealing the image of ‘them’ only exists in our imagination.

The video is projected on gauze, making the images look like they’re barely real, and is presented as a loop with no distinct beginning or end, continually offering new entry points for viewers who walk in and out of the exhibition room.

Exhibited at Area 51 during Dutch Design Week 2019. The first edition was called 'The Imagination of Human', collaborated with Kobi Vogman at 'The East' curated by Tal Erez and Anat Safran at Hansen House during Jerusalem Design Week 2019. 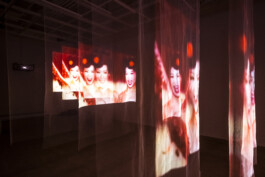